35mm color slide photographed by Rosenfeld and Sons in August, 1977. Image of the skipper, Ted Turner, at the helm of the 12 meter, COURAGEOUS, #US26, with his right hand raised, fist clenched during practice in August of 1977. Ted Turner is wearing a dark blue denim hat, sunglasses and a dark blue with white striped monogrammed jacket with "US26 / 12 / COURAGEOUS" on it. Robert Edward Turner III but best known as Ted Turner, was the America's Cup skipper of COURAGEOUS, #US26. He is the owner of TNT (Ted Turner Network) on television. Known as a philanthropist and media mogul. COURAGEOUS, US #26, was the America's Cup defender and winner in 1974 and again in 1977. She was built by Minneford Yacht Yard of City Island, New York and designed by Sparkman & Stephens. Mount info. handwritten: "394" CREDIT LINE: Mystic Seaport, Rosenfeld Collection, Stanley Z. Rosenfeld photographer. 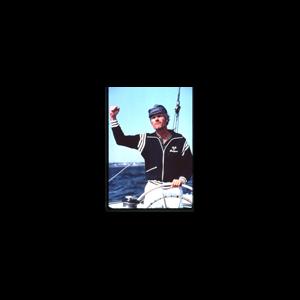