Postcard of the "Charles W. Morgan"

Postcard; Postcard of the "Charles W. Morgan" postcard with one edge that looks as though it is perforated and was once attached to something else (another card, possibly); possibly an advertisement for the film "Down to the Sea in Ships"; beige in color; front has a photograph of a ship, most likely the Charles W. Morgan; printed at the bottom of the card on the front "DOWN TO THE SEA IN SHIPS"; the back side of the postcard has a double-striped border around the edge, and is divided up into a left and a right half; printed at the top of the left half "The "CHARLES W. MORGAN"/ THE "CHARLES W. MORGAN" with full rigged sail/ set is the oldest whaling bark in the world. It was built/ in New Bedford, Mass., in 1841 by Zachariah and Jethro/ Hillman. She has sailed the seven seas. She made twenty/ voyages to Japan and the Ochtosh seas alone, and in 1904 left/ San Francisco and came home via New Zealand after an/ absence of nearly twenty years from her New Bedford dock./ The men at the mastheads are watching for whales. When/ "Thar she Blows" is bellowed on deck the boats on the sides/ are lowered, and the chase for whales begins. All of this/ thrilling adventure is shown in the Elmer Clifton Production/ of "Down to the Sea in Ships". "; below this writing is a dividing line, with "FOR CORRESPONDENCE" printed below it; on the right half of the back is printed "Post/ Card/ FOR ADDRESS ONLY" at the top, next to a placement box for a stamp; inside of stamp box is printed "PLACE/ STAMP HERE/ DOMESTIC/ ONE CENT/ FOREIGN/ TWO CENTS". 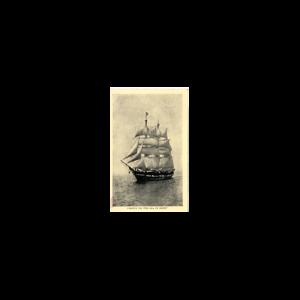