In spite of what this poster implies, women in 1918 did not need to wish they were men in order to contribute to the war effort. Women had served in the Navy Nurse Corps since 1908, and on 19 March 1917-- eighteen days before the U.S. entered the war -- the U.S. Navy authorized the enlistment of women in the Naval Reserves on a volunteer basis. By 1 December 1918 there were 11,275 navy "yeomanettes"-- officially yeoman (F), for female -- as well as 305 "marinettes" in the Marine Corps. These women were generally assigned as stenographers, typists, and clerks, relieving men for field service. Navy secretary Josephus Daniels, a proponent of women�s suffrage, was proud to claim that the navy paid men and women equally for equal work.

The artist, a New York art teacher best known as a portraitist, Charles Howard Christy, first received public attention in 1898, when Scribner�s and Leslie�s Weekly magazines used his illustrations to accompany their reports on the Spanish-American War. Later, his illustrations for Scribner�s would feature the striking Christy Girl, who, like Charles Dana Gibson�s "Gibson Girl," reflected the period ideal of young womanhood. 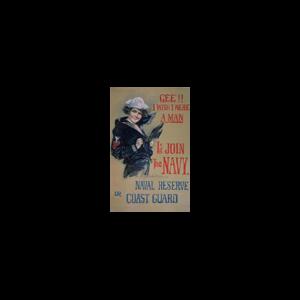